Eyes in the dark on PC

Dubbed as Roguelight, Eyes in the Dark: The Curious Case of One Victoria Bloom is one of the most unique side-scrolling rogue-lite games you will play this year. “Roguelight” is a clever little pun and a hint that protagonist Victoria Bloom only has a flashlight to use while trying to fend off the creepy crawlies in the dark.

Eyes in the Dark captivates right away with its Tim Burton-like cartoon look. The entire game is in black and white, even reminiscent of silent movies, where posters with character dialogue pop up onscreen between shots of characters gesturing towards each other. The game really starts off when we arrive at Bloom Manor and Victoria is forced to explore the big spooky house to save her grandfather from what lurks inside.

Along the way, she’ll uncover secrets about the Bloom family, as well as nifty upgrades for her flashlight that will make her enemies easier to take down.

After the short tutorial sequence that introduces the basic mechanics of the game, Eyes in the Dark leaves the player open to everything to discover. Each run always starts in the main hall, where you can pick up items or upgrades to prepare for the journey ahead, and then move on and see how far you make it in the mansion.

The fight seems easy enough on paper; Armed only with a flashlight, Victoria can aim at her with the right stick and direct the beam at her enemies to kill them. You can also jump up and down, and there are light platforming elements that make the game’s design much more interesting and challenging at the same time. I’ll say this right now: unless, like me, you’re great at platform games, the early hours of Eyes in the Dark are going to be pretty rough.

Don’t let the cute art style fool you. Eyes in the Dark doesn’t compromise when it comes to difficulty; Even in the early rooms, the enemies are relentless, and players must take full advantage of their surroundings to create space between themselves and their enemies while attempting to beam them to their deaths. Jumping up or down a platform too slowly to avoid an attack will take a small amount of damage. Doesn’t sound too bad, other than the fact that enemies like to swarm around you and you’re constantly forced to move while steering your flashlight beam to get out safely.

It certainly doesn’t help that the enemies in Eyes in the Dark are so damn creepy too. The enemy types in this game are mostly insectoids with a bit of a spooky twist, making the game quite unsettling to say the least. Oversized spiders are scary enough, but when you add tentacles and flying larvae, I draw the line. Like most other games in the rogue-lite genre, the boss encounters are unforgiving but fair. It’s up to the player to really take the time to learn his patterns and react accordingly, and like any good rogue-lite game, the sense of satisfaction you get when you finally defeat him after countless deaths is immeasurable.

The good news is that Eyes in the Dark also tries to make your subsequent runs a little bit easier. While you lose all your dungeon progress and flashlight attachments if you die, you can gain knowledge as you progress into the game. If you die, you can use your knowledge to unlock special items and pickups in the main hall to give you a little edge on your next run.

As with any good rogue-lite, knowledge of the dungeon itself is always the best reward you can ask for in Eyes in the Dark. While I certainly struggled in my early hours, thanks in no small part to my poor platforming skills, this is the kind of game that you’ll just “get the hang of” over time. As I continued to play, I slowly began to recognize the movement patterns of the different enemy types. As the rooms kept changing, I quickly began to realize which platforms I needed to jump to immediately in order to clear the room quickly.

Eyes in the Dark also strives to make every run feel a little different than the last by introducing some truly unique attachments for your flashlight. At first it may seem like your flashlight can only shine in one direction, and the only worthwhile upgrades for that are beam power and range. However, Eyes in the Dark began to surprise me when I discovered other interesting upgrades. Before I knew it, I was firing chain lightning, huge projectiles of light, and what can only be described as tiny sound waves that helped me clear my immediate surroundings as I moved forward.

You also have the option to select modifiers each time you enter a new area. You’re allowed to have a boon and a con every time, and these can really help shake up your runs. Of course, it’s always possible to lock yourself in with bad choices and a really sub-par physique. You don’t want to be stuck with a short-range flashlight and a modifier that, for example, dictates that all enemies explode on death, but the variety is nice and planning things carefully will make your runs a breeze.

If there are any complaints about Eyes in the Dark, it’s that the game can feel a bit unpolished in certain areas. For example, in the opening sequence, Victoria reads a letter from her grandfather, but the text doesn’t fit on the piece of parchment at all. There were also a few rare instances where the controls felt a bit imprecise, where my jumps or dashes wouldn’t register until it was too late, and it’s the little issues like these that can potentially make or break a run.

Ultimately, Eyes in the Dark is a unique and very distinctive entry into the rogue-lite genre. It certainly won’t appeal to everyone, but it’s worth a look if you’re in the mood for a charming rogue-lite that looks like it just stepped out of a Tim Burton movie.

Eyes in the Dark: The Curious Case of a Victoria Bloom 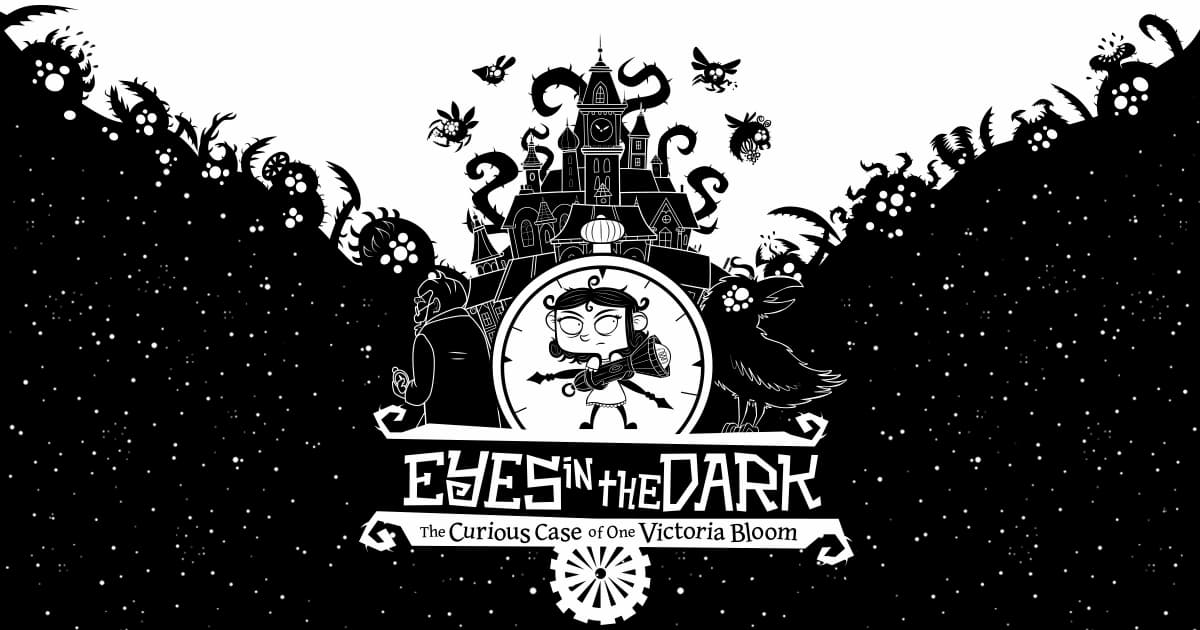 developer
Under the stairs