Two consecutive summers in which large gatherings were frowned upon, if not banned, made it impossible for Kingdom Bound Ministries to hold its annual four-day festival at Darien Lake. But with all COVID-19 restrictions lifted and attendance at concerts and events – particularly outdoors – rising, Kingdom Bound is back in full swing for the first time since 2019 from this weekend.

Donna Russo, director of the festival and CFO of the ministry, said: “We feel so blessed to be able to return after a two-year absence. Our team has been preparing for many months so that we can celebrate together. We look forward to seeing old friends and family again and meeting new friends who are joining us for the first time.”

The 34thth Kingdom Bound takes place Sunday through Wednesday with activities at the amusement park and campground at Darien Lake.

Russo said: “Psalm 66:1-4 is our motto this year: ‘Rejoice to God, all the earth! sing the glory of his name; make his praise glorious. Say to God, “How great are your deeds! So great is your power that your enemies will flinch before you. The whole earth bows down to you; they sing hymns to you; they sing the praises of your name.’

“We will SHOUT, we will SING and we will praise the name of the Lord!”

For youth, their families and pastors, the performing arts festival offers speakers, games, dance parties and a marketplace full of inspirational items, keepsakes and clothing.

Remarkably, Kingdom Bound is one of the largest Christian music festivals in the world, both in terms of size — about 40,000 people attended three years ago — and in terms of the list of top-grossing artists topping the PAC stage.

Among the acts set to perform this year:

•Sunday: Ledger, Colton Dixon and Headliner Skillet at the PAC

•Monday: Brother McClurg and Ben Fuller in the worship tent; Rebecca St. James, Cochren & Co., We Are Messengers and for KING & COUNTRY at the PAC

•Tuesday: Brooke Nicholls and Paul Baloche in the worship tent and on the main stage; Jordan St Cyr, Matthew West and Casting Crowns at the PAC

Brooke Nicholls, who lives in Toronto, said: “I was there as a kid and I had to be in these tents and on these stages. And just like I’ve had the pleasure of watching some of the best in the business with my jaw dropped. And I remember being so struck by those moments as a young girl. And here I am, all these years later, I’m one of the acts – I get to play on the main stage. I get to play in the worship tent. And it almost feels like a pinch moment, you know?

“Actually, I’m really thankful for Kingdom Bound and the way they are. It’s been hard with COVID but they’re still trying.

Nicholls made her Kingdom Bound debut in 2019.

“I was like a little kid on Christmas morning (laughs),” she said. “You know, woke up; It was Kingdom Day. And it was incredible. It was amazing. Meet people, sing with people, worship with people. It just felt like this 360 degree moment.”

Rebecca St. James – and her brothers Luke and Joel Smallbone of KING & COUNTRY – will perform as part of Kingdom Bound at Darien Lake on Monday. (Photo courtesy of Smallbone Management)

Rebecca St. James has been a part of Kingdom Bound for over 25 years. She returns with Kingdom Come, her first full-length album since 2011.

“When I first wrote these songs, I had no idea that a pandemic was just around the corner and that people would be so desperate for that kind of hope or that kind of language about it that there would be a dawn and a sunrise be; we just had no idea,” St. James said.

At past festivals, the singer, songwriter, author, actor, and podcast host has openly shared stories of personal pressures, loss, and even an unplanned semi-retirement.

“I’m thankful that God was able to use my pain and give people real hope — not just through the music, but through my testimony,” St. James said. “When I do shows, I can tell the story of God making my dreams come true as a wife and mother – that’s what I’m living now.” And I’ve held on to it so publicly for so many years. And then redeeming just a few of these other challenges as well and bringing us into a new day and a new time.”

St. James said she is looking forward to performing on Kingdom Bound.

“I mean, for me there are just so many amazing memories,” she said. “I think Kingdom Bound was either the first festival I ever played at, or one of the first in the first couple of years that I even made music in the mid ’90s. Well, I mean, I just remember riding roller coasters there and having my band and playing in the middle of the park once and then doing the seminars in the grove area.

“Just so many memories. And I think it’s just really sweet to have that kind of story.

“And many things change in life; many things disappear, they just don’t exist anymore. And to have something as iconic as Kingdom Bound, to have some of these people behind the scenes that I’ve known all these years – who kind of watch me grow up – that’s just really special.”

For more information on Kingdom Bound or tickets, visit https://www.kingdombound.org. 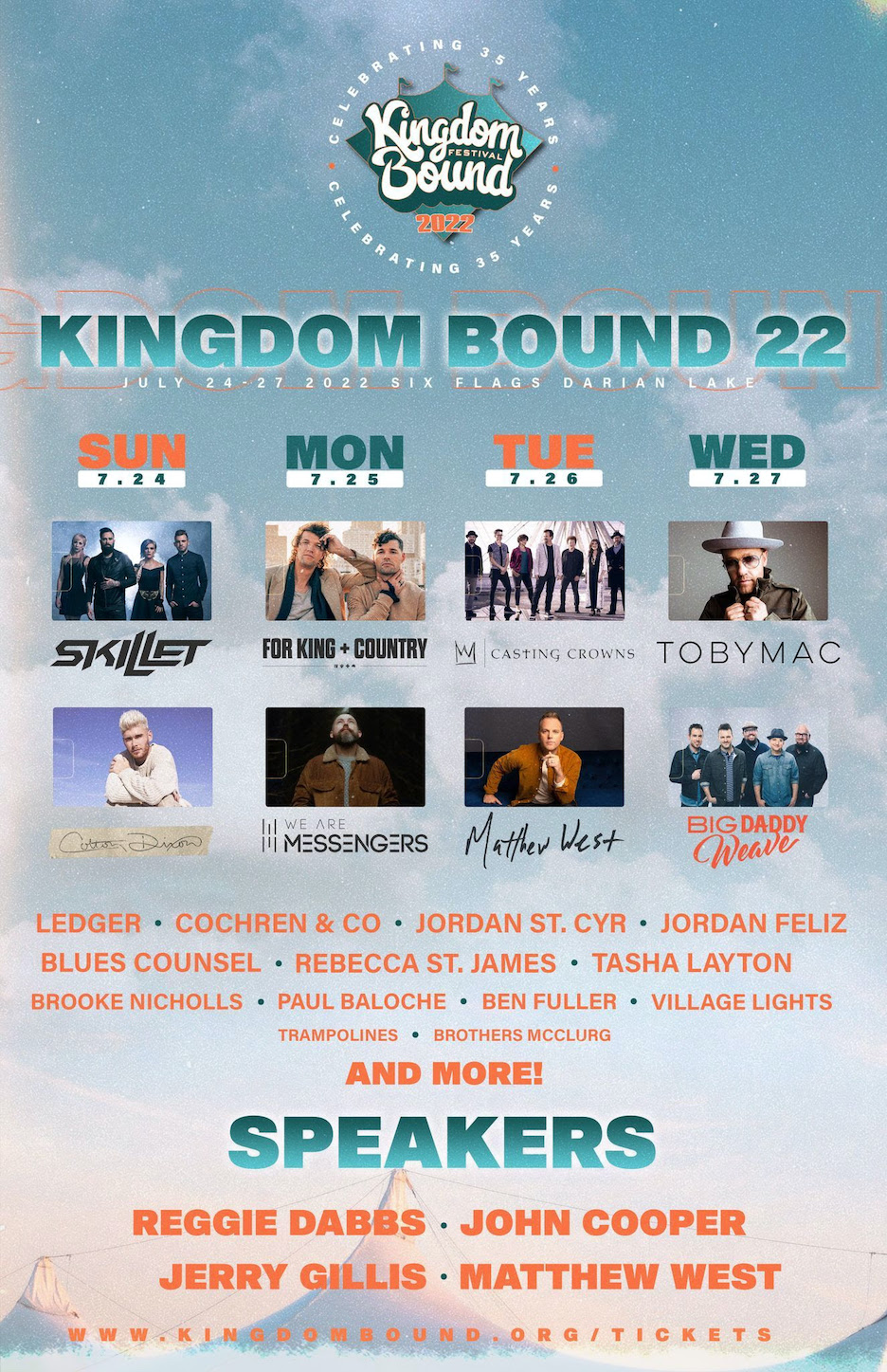