The Northern Kentucky Court Appointed Special Advocates for Children (CASA) are trying to fill as many volunteer positions as possible as child abuse and neglect rise in the wake of the pandemic. The program is designed to train and appoint volunteers who are passionate about serving abused and neglected children who are in family courts in Kentucky and across the United States.

“As a state association, we are recognized under Kentucky’s revised charter and provide technical assistance and capacity building for the local cost programs, but our primary mission is to bring CASA to every county in the Commonwealth,” said CASA Kentucky State Director, Andrea Bruns.

Bruns began her CASA career as a volunteer in 2007 after relocating to Kentucky from Washington DC. She decided on her career path much later in life, having worked in the trade association industry for two decades. She paved this new direction in memory of her mother, who worked as a CASA volunteer when Bruns was a teenager.

“Every day is a challenge, but every day is worth it,” said Bruns. “Whether you are a volunteer or a paid employee, everyone is committed to the mission because this work is so important. We must make progress by putting the child at the center of every decision we make.”

There are currently 80 counties out of 120 in Kentucky with active CASA volunteers. Each volunteer goes through a 30-hour training process on specific state regulations as well as national guidelines.

“Unfortunately, abuse and neglect are rampant and have increased during the pandemic along with the need for CASA,” Bruns said. “We are launching a statewide volunteer recruitment campaign in Boone and other Northern Kentucky counties.”

The recruitment campaign is scheduled to run through 2024 and the goal is to have 1,500 volunteers nationwide.

CASA hopes to have a presence in 100 counties and they are confident of achieving that goal. In the past year, over 17,000 new children were brought into the Kentucky court system and 1,300 new volunteers were recruited into CASA.

“These are children who are caught up in a situation they cannot control, and having that one consistent person by your side in a large system can make a huge difference, which is often scary to navigate on your own,” said Bruns. “It motivates me every day to make sure every child in need in Kentucky has access to a volunteer.”

Volunteers are also trained in an active courtroom for up to six hours to prepare for possible outcomes, and are then given their first case, which requires all volunteers to visit the child
monthly.

“It’s not an easy opportunity to volunteer, but the reward and need is significant because you can’t go in and volunteer for an hour, so we want people who care about the lives of children change,” said Bruns.

In 2021, 3,758 children in Kentucky were assisted by a court-appointed special counsel. Eileen Donahue, the 2021 Bob Babbage CASA Volunteer of the Year, began her journey as a volunteer in Lafayette, Indiana before her husband and children moved to Kentucky in 2012.

“I was working for a newspaper in Indiana around 2006 and the CASA group put a public service ad in the newspaper because they were looking for volunteers,” Donahue said. “I knew a little bit about the program, but I knew it was a big time commitment, so I didn’t get involved until I lost my job and took that as a sign I had to get involved.” 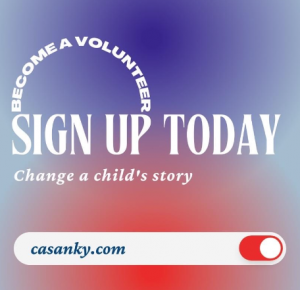 In 2012, Donahue completed another CASA training course in Boone County before serving on children’s behalf in the Kentucky court systems for the past decade. When she is not focusing on her advocacy, she spends her free time in the springtime gardening her favorite flowers with her four grandchildren, her cat Bonita, and her dog, named Romeo.

“There is always a new learning experience in being an advocate, because that’s the way it is in every case
different and challenging, but it’s also an opportunity to continue growing as a person,” says Donahue
said. “I’m also a vegetarian who campaigns on all kinds of animal welfare issues, if that tells you
something about my personality.”

Donahue mentions her first monumental moment when she attended a live court session during her CASA training. She describes it as scary but liberating once she felt comfortable speaking her mind after practicing her testimony. Donahue said she realized her advocacy was important because it impacted what was happening in the lives of every child she was responsible for.

“My most memorable experience of this program is seeing children being adopted by their families forever,” said Donahue. “A certain organic family voluntarily gave up their rights to a child that I have advocated for because they knew it was in the child’s best interests and while this situation was unusual, it was rewarding to see that the children were successful after many trials and difficulties I helped them work through.”

Donahue is an experienced volunteer for many other organizations besides CASA, but she says this organization brings the most challenges and rewards. After winning the 2021 Bob Babbage Volunteer of the Year award, she credits her happy childhood with her generous and gentle nature, which led to her giving back to the children who needed it most.

“I was surprised to receive the award in Boone County, and then when I received it from across the state of Kentucky, I was pretty blown away,” said Donahue. “Colleen Maier had some great things to say about me when I received the award and I didn’t think I deserved it, but it was an honor to receive it.”

Maier, the executive director of Boone County CASA, began her role as director of administration and funding in 2006. There are two volunteer coordinators working with her and 34 appointed volunteers.

“My favorite part of the job is working with all the volunteers and seeing them make a positive difference in the lives of these children,” Maier said. “They’ve been at this for over a year and it’s great to see the growth once the child has a safe permanent home and that can be their biological parents who are adopted or just knowing the child is safe is.”

Maier graduated from Northern Kentucky University with a bachelor’s degree in social work.

She lives in Walton with her husband Joe and their two sons Gus and Jake. When she’s not working, her family enjoys outdoor activities like boating and swimming.

“Our volunteers have two cases at most, which gives them the time and energy to focus on those kids in those one or two cases,” Maier said. “Social workers have many cases where CASA has more time to delve deeply into what is going on with this child.”

A person interested in becoming a CASA volunteer can visit the website for more information on how to register. Those who have empathy for children in difficult family situations and are passionate about helping every child in Kentucky have the best life are the best candidates for this position.

“You don’t have to be from a solid background to volunteer, but we want every community citizen who has a heart, cares for children and is willing to put in the time and be able to see a situation through bring the end,” said Bruns.